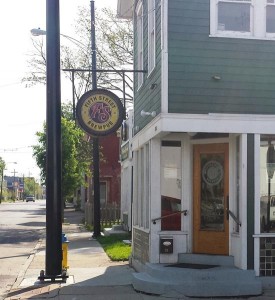 The Fifth Street Brew Pub is located in the historic St Anne’s Hill. The property was purchased in 2010 by 32 neighbors that were convinced by Brian Young and Joe Dierkers to invest anywhere from $1000 – $1500 per share in order to purchase the property at 1600 E. Fifth Street. The members formed the 1600 Group LLC, made improvements to the exterior, and gutted the inside.

Brian and Maureen Barry, another Founding Member, traveled to Austin, Texas in 2012 and met with one of the Founding Members and Brewmaster for Blackstar Co-op, the first co-op brewpub to open in the country. As many of you might know Fifth Street Brew Pub was the second, and the very first in the State Of Ohio.

The Brew house was officially ready for brewing in the summer of 2014. Luckily, being a member owner is not required in order to enjoy the great beers and excellent food!

I like to start out with the Herbivore No. 1 Pale Ale. It’s a very unique and crisp beer created with a secret blend of herbs. To go with it, I would order the Buffalo Chicken Nachos – crispy salted corn tortillas with homemade buffalo cream cheese sauce, fire braised chicken, corn and black bean relish, and melted cheddar cheese.  Perfect for sharing.

Next I order an 85 Schilling Scottish Ale Nitro.  Its toasty rich caramel flavor is worth way more than 85 schillings.  For my entrée I order the FSB Salmon B.E.L.T.  This is the classic BLT taken to a new level…seared salmon, pecan wood smoked bacon, lettuce, tomato, and an over easy egg with a house-made creamy garlic-herb aioli all served on a toasted Telera Roll.

There are several other great appetizers, salads, and sandwiches. There are numerous other drinks and beers as well. The atmosphere and service are spectacular.