GET TO KNOW THE ATS STAFF – Brian Bulgrin 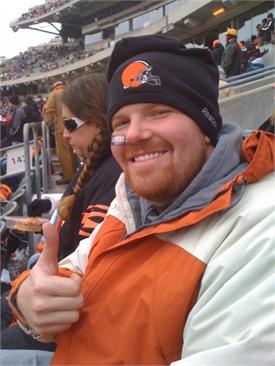 If you’ve visited the ATS lab, you might have noticed a big, red-headed, bearded guy working in the back corner.  He’s hard to miss!  Brian Bulgrin joined our team just over two years ago following six years of service (including three combat deployments) in the US Marine Corps.  In fact, Brian was stationed with our lead Ultrasonic technician, Nathaniel Reveal, for four years in Cherry Point, NC, where they worked together performing non-destructive testing on military aircraft.

Brian holds Level II certifications in the Ultrasonic, Magnetic Particle, Liquid Penetrant, and Eddy Current inspection methods.  He is also certified as a Level I rope access technician and is proficient in wire rope inspection.  With the work load in our Ultrasonic Department growing at a steady pace, Brian has hung up his climbing harness for now and is focused on working with our immersion inspection system.

Brian and his lovely fiancee Cathy currently live in Miamisburg and are planning a September 2013 beach wedding.  Brian is a HUGE sports fan!  He plays a mean third base in his rec softball league and spends most fall Saturdays cheering on Ohio State.  He also backs all teams from Cleveland, which some might say is a bad choice.  Since he was born there, we let him get away with it.