GET TO KNOW THE ATS STAFF – Evan Davell 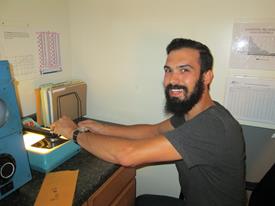 Evan Davell is celebrating his 8 year anniversary with ATS this month.  It’s hard to believe that such a young guy has been here that long!  Evan came to ATS shortly after graduating from Vandalia Butler High School and quickly earned Level II certifications in Radiographic, Magnetic Particle, and Liquid Penetrant inspection.  Today, Evan’s main focus is Radiography.  He really enjoys the traditional method and shooting with film.  Evan is currently in the process of completing his Level III Radiography certification.

Outside of ATS, Evan’s interests are focused around music and the outdoors.  He plays lead and rhythm guitar in a local cover band and can often be found hanging out at Omega Music is the Oregon District.  Nearly every weekend is spent camping, backpacking, rock climbing, or cycling.  In fact, Evan is always on his bike!  Most days he cycles to work, and he participates in a Century Ride (that’s 100 miles!) almost every month out of the year!