Do you ever get a random flash of memory – something along the lines of “a year ago today I was doing… (fill in the blank)?”  That’s been happening to me a lot lately because one year ago right now, we were in the midst of Chris Small’s Man of the Year campaign.

If you’ve been connected to American Testing Services for a while, you might remember that in late February 2015, Chris agreed to be one of 11 candidates (7 men and 4 women) to compete in the Leukemia & Lymphoma Society’s Man & Woman of the Year fundraising campaign. The next ten weeks were a crazy, stressful, exhilarating, exhausting, fulfilling whirlwind of fundraising competition.  I’m grateful to have been a part of it and to have forged a connection to an amazing organization that is fighting the good fight. 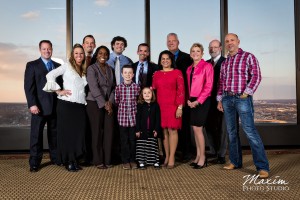 The Leukemia & Lymphoma Society (LLS) was founded in 1949 and today is the world’s largest voluntary health organization dedicated to funding blood cancer research and providing educational and patient services. You can learn more about them at www.lls.org.  It’s estimated that over 1.1 million Americans are living with or are in remission from a blood cancer.  Every four minutes, someone new is diagnosed.  Every ten minutes, someone dies.  Leukemia causes more deaths than any other cancer among children under the age of 20.

The work is paying off. LLS has invested more than $1 billion in research to find the cause and cure for blood cancers.  This research has led to groundbreaking treatments that are vital to treating blood cancers and many other forms of cancer.  In fact, nearly 40% of new cancer therapies approved by the FDA between 2000 and 2013 were first approved for blood cancer patients.  In 1964, the five-year survival rate for children with the most commonly diagnosed leukemia was 3%.  Today, it’s 90%. 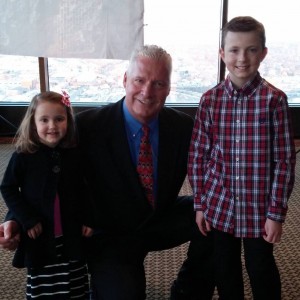 Chris Small with the 2015 heroes

It’s time for a new crop of ten candidates to compete for the titles of Man and Woman of the Year. Check them out here – http://www.mwoy.org/soh/localchapter/dayton/  From now until the Grand Finale on May 13th, these community and business leaders will ask for your vote (via your dollars) as they raise funds in honor of the campaign heroes – two great kids who are both survivors – and their personal heroes.

Do you know one of the 2016 candidates? If you do, I know you’ll be hearing from them.  (Seriously, the only way to stop Chris from calling you last year was to make a donation).  Even if you don’t, I hope you’ll support them the way you supported our campaign last year.  Remember that a whopping 78% of your donation goes directly to fund the mission of LLS.

In one way or another, cancer touches us all. But when we work together in this fight, cancer loses.  Last year, eleven candidates, their teams, and you – the Dayton community raised over $800,000 to kick cancer’s butt in ten short weeks.  I know we can do it again.  We aren’t going to beat cancer someday.  Someday is today. 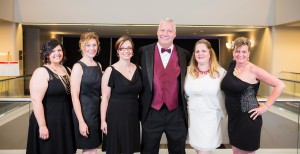