Big things are happening in our Ultrasonic Department!  When we say “big,” we mean the addition of a new six foot by eight foot, six-axis, full contour immersion system.  This new immersion tank has a 60″ diameter turntable, a 2,000 pound part capacity, and holds about 950 gallons of water.  It is nearly double the size of our existing system, which operates with a 36″ turntable and 1,000 pound part capacity. 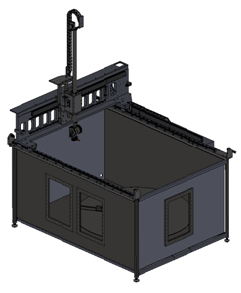 The expansion will also require replacing our one ton crane with a two ton jib crane that has 360 degree rotating capabilities.  This new jib crane positions the Ultrasonic Department for future growth as well.

As the name suggests, Ultrasonic Immersion is a form of inspection that takes place with a part fully submerged in water.  An inspection probe transmits sound waves while the water acts as a couplant enabling sound transmission.  This type of immersion system operates in similar fashion to a CNC (computer numerical control) machine tool, with multi axis functions that follow the part geometry without actually touching it.

The data collected from the movement of the scanning probe produces an image.  Our new immersion system includes more advanced software that allows the scan image to be overlaid on the part geometry, producing an almost 3-D picture.  Upgraded images aid in part evaluation and allow for better defect location.  Our existing immersion system will receive the software upgrade as well so that all parts receive the same high quality inspection.

“In addition to the more advanced data capture, we are excited that the addition of a second immersion system will cut our part turnaround time in half,” said Nat Reveal, Project Manager and lead ultrasonic technician.  Adds Dan Reynolds, Technical Sales, “We considered an immersion system similar in size to our current system which would double our volume capacity, but it wouldn’t meet the requests we’re seeing to inspect larger parts.”

New staff was added to the Ultrasonic Department in January 2012 to allow adequate time for training and certification before the new system arrives.  Excavation for the crane and the tank are scheduled to start soon, and the new system should be up and running by the beginning of the New Year.

For more information on system capabilities, please email Chris Small or Dan Reynolds, or call our office at 937-298-9390.