You know that your parts require some kind of non-destructive testing inspection, but do you know what is happening to your parts when that test method is applied?  Over the next few weeks, our Level III technicians will provide an explanation of some of  the NDT methods we employ along with advantages and limitations of each. 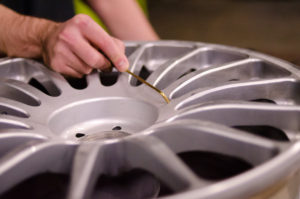 Eddy Current testing (ET) is a form of non-destructive testing that uses the principal of electromagnetic induction. This is the same principal that you probably used in grade school to pick up paper clips. A battery connected to a wire that was wrapped around a nail made that nail magnetic.

With this in mind, an eddy current test consists of a copper coil or inspection probe, with an electrical current running through it. This coil is brought into close proximity with your test piece, thus creating a magnetic field and a current flow in the part. These secondary currents are known as eddy currents.

Picture throwing a rock into a pond and the ripples that ring out from the center. This is how eddy currents flow. Any disturbance in these eddy currents, such as cracks or voids, cause a disruption in the current flow. A trained technician using a properly calibrated flaw detector can interpret these changes to determine if they are a defect in the part or a non-relevant indication. 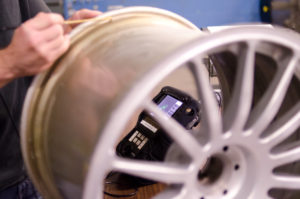 Eddy Current testing is a quick and clean inspection method. It requires no chemicals and little to no surface preparation. Eddy current testing is widely used in the aviation industry, with heat exchangers, and for bar and rod testing.