You know that your parts require some kind of non-destructive testing inspection, but do you know what is happening to your parts when that test method is applied?  Over the next few weeks, our level III technicians will provide an explanation of each NDT method we employ along with some advantages and limitations of each.

We continue this series with Radiographic testing (RT).

X-rays are a kind of super-powerful version of ordinary light: a higher-energy form of electromagnetic radiation that travels at the speed of light in straight lines, just like light waves do. If you could pin x-rays down on a piece of paper and measure them, you’d find that their wavelength was thousands of times shorter than that of ordinary light. Because the energy of electromagnetic waves is directly related to their frequency, x-rays are much more energetic and penetrating than light waves. So, x-rays can travel through things that ordinary light waves can’t because they’re much more energetic.

As a non-destructive testing method, radiography works in much the same way it does in the medical field.  However, industrial methods require much more power and exposure time than medical applications because ­­­­­­­­­­­­­­­­­­­­­­metals are harder to penetrate than flesh and bones.

Just like at the doctor, the specimen to be examined is place on top of a specially designed piece of film.  The energy of the x-rays, created in an x-ray tube, is directed at the test piece according to its thickness and density. As the x-rays penetrate the part, the radiation will strike and expose the film, creating an image. The x-ray film is then developed similar to photographic film using developer and fixer.  Multiple angles and view may be necessary to capture all areas of interest.

The process of exposure is similar to the way a photograph is created.  If you remember older cameras, such as a 35mm, that required film, you will remember that the film had to be keep away from light before being put into a camera because light radiation would affect the film. The same is true for x-ray film. If we took the film out of its holder and turned the lights on, the film would come out black with no image when developed.

In computerized radiography, an image is captured on a phosphor imaging plate and is then converted to a digital file by a digitizer.  A phosphor plate can be reused thousands of times unlike film, which can only be used once. 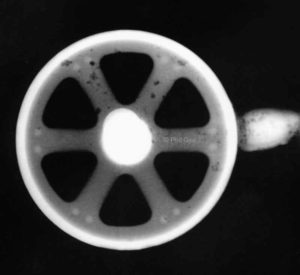 The varying shades of black and white seen on an x-ray image are a measurement of the number of x-rays that make it through the test specimen and reach the film on the other side. More x-rays can penetrate a thin section, creating more exposure and a dark area on the film.  In a thicker section, less x-rays would penetrate and the film would be lighter. If there is a defect in your part, the x-ray intensity in that area on the film will be greater and will create a dark area on the film.  This happens because instead of a dense material (metal), this area is filled with air. Air will allow more x-rays to pass through to the film.

For this reason, radiographic inspection is a great method for locating internal discontinuities and providing a permanent record of them. RT is useful for detecting discontinuities such as porosity, shrinkage, cold shuts, hot tears, lack of fusion, lack of penetration, and sometimes cracks.

Radiography is a specialized test method that requires many hours of training. While it leaves no lasting effects on metal parts, radiation can be very dangerous to people and must be controlled. In addition to the inspection methodology training, our technicians are also trained to safely shield and protect themselves and others from the damaging effects.