GET TO KNOW THE ATS STAFF – Avery Wynings 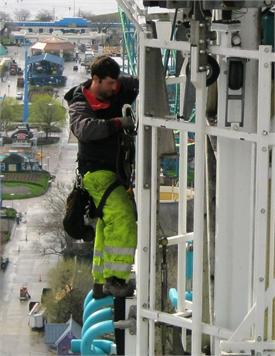 As one of our lead Rope Access technicians, Avery Wynings is no stranger to heights.  As soon as our amusement park customers close operations for the season, Avery will be headed into the field to climb roller coasters with the Rope Access Team, looking for any issues with the structural integrity of the steel track and columns.

Avery has been part of the ATS staff for three years.  He is certified as a Level III rope access technician by SPRAT (Society for Professional Rope Access Technicians) and as a Level II in magnetic particle, liquid penetrant, and visual inspection.  Avery is also very experienced with bolt torquing and wire rope testing, both used frequently in amusement park inspections.

Avery and his wife Amber both grew up on the East Coast and lived in the Northwest before settling in Ohio.  While out West, Avery used his rope access skills to perform theater and arena stage rigging and special effects.  He also worked as an arborist and still maintains status as an ISA certified arborist.  In September Avery volunteered at the “Over the Edge” fundraiser benefiting Big Brothers Big Sisters held during Urban Nights in downtown Dayton.  Avery helped volunteers rappel down the side of the KeyBank Tower, putting those rope access skills to use for a great cause!