Where Did It All Begin? 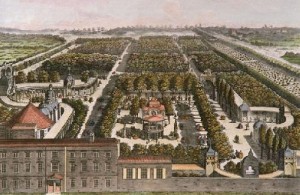 The amusement park evolved from three earlier traditions, the first dating all the way back to the Middle Ages. Periodic fairs were held as temporary markets and were often tied to a special religious occasion.  One of the earliest fairs was the Bartholomew Fair in England, which began in 1133.

Pleasure gardens became popular in the 18th and 19th centuries, especially around London.  Vauxhall Gardens, opened in the 1660s, had an admission fee by the late 18th century for many of its attractions and was noted for entertainment such as tightrope walkers, hot-air balloon ascents, concerts, and fireworks.

The concept of a fixed amusement park was further developed by the advent of the world’s fair, the first being held in 1851 in London. The purpose of the fair was the celebrate the industrial achievements of the world’s nations, and it was designed to educate and entertain visitors.  The Chicago World’s Fair in 1893 was held at an enclosed site and merged entertainment, engineering, and education.  Planners included a midway area that offered rides; concessions; and entertainment such as games of chance, penny arcades, and shooting galleries. 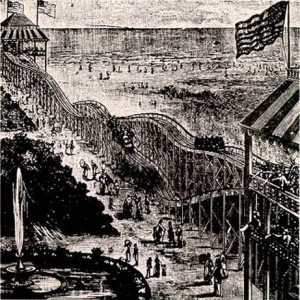 The modern amusement park evolved from seaside pleasure resorts that became popular day-trips and weekend holidays in Blackpool, England and Coney Island, New York. Both grew in popularity and size throughout the 19th century.  The first amusement ride installed at Coney Island was a carousel in 1875, and the “Switchback Railway,” the first roller coaster designed as an amusement ride in America, was constructed in 1884.

The oldest roller coasters are believed to have originated from so-called “Russian Mountains,” which were specially constructed hills of ice reinforced by wooden supports. They were built to heights of 70 to 80 feet and consisted of a 50-foot drop.  In 1827, a Pennsylvania mining company constructed the Mauch Chunk gravity railroad, an 8.7-mile downhill track used to deliver coal.  By the 1850s, the “Gravity Road,” as it became known, was providing rides to thrill-seekers for 50 cents a ride.

Coney Island’s Switchback Railway was created using this idea as a basis. Soon, coasters included lift hills, dark tunnels, and painted scenery.  Disneyland introduced a design breakthrough in 1959 by constructing the Matterhorn Bobsleds using a tubular steel track.  Unlike wood, the tubular steel bends in any direction, allowing designers to incorporate loops, corkscrews, and many other maneuvers.

Sounds like we owe Walt Disney a “thank you.” Without that move to use steel in roller coaster construction, the amusement industry wouldn’t need non-destructive testing and our services!