Our work with the amusement industry is somewhat of a niche market. Because it feels so different from the aerospace, commercial manufacturing, and foundry customers we work with, we are often asked how we ever became connected to the world of roller coasters and amusement rides.

For the answer, we have to travel back to the mid-1980s – to the days of leg warmers, Prince’s “Purple Rain,” and all those great John Hughes movies. In those days, ATS president and owner Chris Small was a technician for local non-destructive testing firm Dayton X-ray.

In 1984, a Dayton X-ray salesman began calling on Kings Island. They were experiencing a lot of rejected train parts for both the Beast and Racer roller coasters.  Replacing those parts was getting expensive.  Dayton X-ray convinced the powers-that-be at Kings Island to give non-destructive testing a try, and Chris was the technician on the job.  The NDT inspections showed that the “rejects” were actually tool marks that did not damage the integrity of the parts and did not require them to be replaced.  That equaled some big savings for Kings Island. 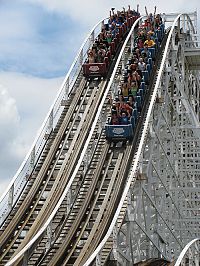 At this point in time, non-destructive testing was not widely used in the amusement industry, but Kings Island continued working with Chris. As he continued to gain credibility by finding the real rejectable defects, the inspections expanded to include ride structures as well as train parts.  The project continued to grow as Chris helped Kings Island develop a system for serializing parts and set up an in-house inspection program and training.  Soon other amusement parks, most notably Cedar Point in Sandusky, got on board and wanted to develop the same type of testing program.

In 1982 the federal government had handed over regulation of the amusement industry to the states. By the early 1990s NAARSO (National Association of Amusement Ride Safety Officials) had been established.  This non-profit organization is focused on the advancement of amusement ride and device safety through communication.  Using several outlets, they provide education and resources to amusement industry safety professionals, one being an annual conference.  Chris was able to speak at the NAARSO conference about NDT and provide some training about what information amusement owners should provide to an NDT inspector and what information they should receive after an inspection.

In 1994, Chris moved into sales and management. While he was no longer the technician providing the inspections, he remained involved and connected to the amusement customers.  He continued speaking at NAARSO events, sharing information on new inspection technologies.  In February 2002, Chris set out on his own and created American Testing Services.  Due to the close relationship he had developed with maintenance staff, Kings Island became ATS’s first customer.  Soon after, Cedar Point called, and the rest, as they say, is history.  Today Cedar Point is ATS’s single largest customer and the amusement industry makes up 18% of total business.

Chris also continues to be involved in the advancement of ride safety. In 2005, Chris was appointed to the State of Ohio Advisory Board on Amusement Ride Safety.  The board advises the State Senate and House of Representatives on safety rules that should be in place for amusement operators.